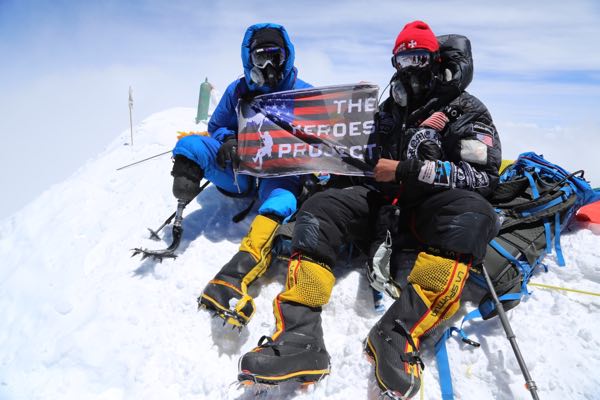 "I was looking for something to completely change myself... and really get rid of the demons that were created from war," Linville told CBS News in April as he headed to Tibet for his latest climb.

"The team is healthy and safe and currently descending the mountain," the group said in a statement announcing the feat.

Linville had already reached the summit of some of the highest peaks in the world on one leg. He was defusing bombs in Afghanistan in 2011 when he was injured as an explosive device detonated, leading to the amputation of his right leg below the knee.

"Can't get any taller than Everest, you know?" Linville said, laughing. "There is nothing else."

The Heroes Project was started by former Hells Angel biker Tim Medvetz, who summited Everest in 2007, six years after suffering life-threatening injuries in a motorcycle crash. The experience inspired him to create the nonprofit organization that helps catastrophically injured war veterans climb the world's tallest mountains.

"The team is healthy and safe and currently descending the mountain," the group said in a statement announcing the feat.

"60 Minutes" followed Medvetz and Marine Isaac Blunt in 2013 as they climbed the tallest peak in Australia.

He's also taken wounded vets to the top of the highest mountains in Antarctica, South America, North America, Europe and Africa. The only continent that remained was Asia -- and Everest.

"You have to find the right mountain for the right injured veteran, and Everest is the big one," Medvetz told CBS News before the climb.

Linville was a member of a bomb-disposal unit in Afghanistan in 2011 when he stepped on a buried explosive and suffered a traumatic brain injury, an amputated finger and a severely damaged foot. After 14 surgeries over 18 months, the married father of two decided he'd had enough.

"Every day was just pain and pain killers... and eventually I made the decision to have it amputated below the knee," Linville said.

"Out of all of the military branches, he enlists in the Marine Corps," Medvetz said of Linville. "Then he gets out of boot camp and decides, 'I'm going to start defusing bombs, one of the most dangerous jobs in the Marine Corps.' Then he tells the doctor, 'Cut my leg off.' ... I'm like -- that's the guy. That's the guy. Because you don't make those decisions in your life without being strong here [in the head] and here [in the heart]. And you can ask anybody, interview anybody who's climbed Everest and they all have that same attitude."

It was not the men's first attempt at Everest. In 2014, they climbed the mountain's south side from Nepal. They'd been training for four weeks when an ice-chunk the size of a 10-story apartment building crashed down the mountain, killing 16 Nepalese guides. The climbing season was canceled.

In 2015, they tried again, this time from the north side of the mountain in Tibet. They'd just gotten to base camp when another disaster struck.

"All hell breaks loose. 7.8 earthquake hits, I've never felt the ground shake like that in my entire life," Medvetz recalled.

The earthquake killed nearly 9,000 people and triggered an avalanche at the base camp in Nepal that killed more than 20. Instead of climbing, the two men pitched in on relief efforts.

"It was a difficult time coming home last summer and like soul searching and really being like, 'Can I do this again?' ... But at the end of the day, we set to do this mission and be successful," Linville said.

"It's a whole movement that has become bigger than Tim Medvetz. And it's become bigger than Charlie Linville," Medvetz said. "All of a sudden you turn on the TV and here's a guy with one leg climbing Everest. If that don't get you off your butt to... take back your life, I don't know what is."