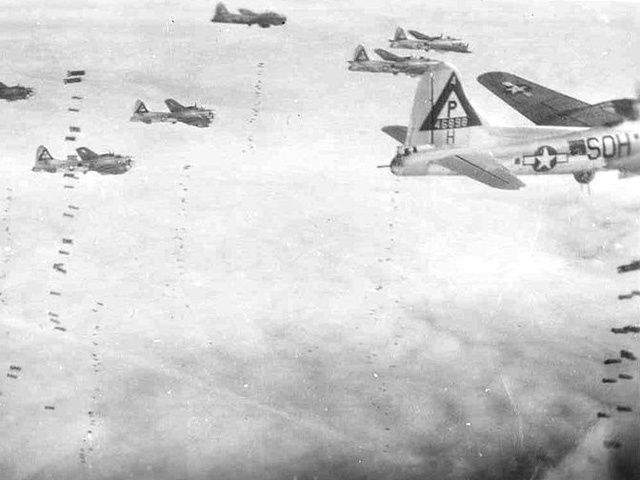 Until 1943, when the United States Air Force stepped up its air campaign against the Nazis from bases in England, filling the atmosphere with contrails, the local skies had remained largely free of civilian or military airplanes. For a couple of latter-day researchers, that unique moment in history also offered something of a test lab to examine the impact those huge bombing runs had on the local climate.

In a study published today in the International Journal of Climatology, Prof Rob MacKenzie from the University of Birmingham and Prof Roger Timmis of England's Environment Agency, examined how contrails, or vast aircraft condensation trails, kept down local morning temperatures. They linked that change to the sharp increase in the number of planes based in East Anglia, the Midlands and the West Country regions of England.

"Witnesses to the huge bombing formations recall that the sky was turned white by aircraft contrails," said MacKenzie, now at the University of Birmingham. "It was apparent to us that the Allied bombing of WW2 represented an inadvertent environmental experiment on the ability of aircraft contrails to affect the energy coming into and out of the Earth at that location."

Contrails get produced when cold air mixes with hot and moist plumes of engine exhaust. Coincidentally, climatologists had another opportunity to study the impact of contrails in the days following the Sept. 11, 2001 terror attacks, when most aviation was grounded in the United States. Research published by David J. Travis, an atmospheric scientist at the University of Wisconsin-Whitewater, found a difference between the daytime maximum and night-time minimum temperatures in measurements taken between Sept. 11 and Sept. 14, 2001