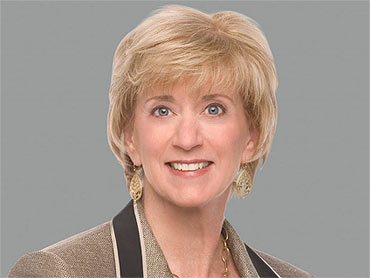 (WWE)
Linda McMahon, CEO of World Wrestling Entertainment, "appears primed to run for Senate in Connecticut and should make an announcement very soon," a source tells The Hill.

A second source told the newspaper that McMahon, WWE Chairman Vince McMahon, is "99 percent" sure she will run.

McMahon, a Republican, appears to be a serious candidate: she has reportedly hired a pair of consultants and a National Republican Congressional Committee spokesman and done polling on the race.

She also has a personal fortune; The Hill writes that she could "spend potentially tens of millions of dollars of her own money on the race."

McMahon would face Rep. Rob Simmons, state Sen. Sam Caligiuiri and possibly former ambassador to Ireland Tom Foley for the GOP Nomination. If she gets it, she would face Democratic Sen. Chris Dodd, who is seen as vulnerable, in the general election.

In vaguely-related news, CNN is reporting that former professional football player Jay Riemersma, who was a tight end on the Buffalo Bills and Pittsburgh Steelers, has announced he is running for Congress in Michigan.

Riemersma, a conservative Republican, vowed to "never vote to raise your taxes" and compared Congress to the NFL.

He has reportedly been working for the conservative Family Research Council and last year wrote a letter titled, "How could Christians vote for Obama?" In it, he implored Christians to vote "on Biblical principle."