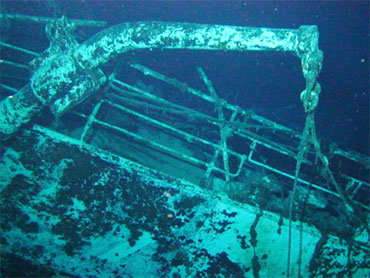 Shipwreck hunters have captured the first underwater footage of an Australian World War II hospital ship that sank in 1943 and left 268 people dead.

A search team led by U.S. shipwreck hunter David Mearns sent a submarine robot more than 6,500 feet below the surface to snap the images of the Centaur on Sunday. The footage showed the ship's bright red cross and a corroded number 47, its identification number.

The Centaur sank off the Queensland state coast. Just 64 of the 332 people on board survived.

Australia said the ship sank after being torpedoed by the Japanese, but Japan says the circumstances surrounding the sinking are unclear.

Mearns found sonar footage of the Centaur on Dec. 20, 30 miles east of the southern tip of Moreton Island at a depth of 6,755 feet. Sunday's images helped confirm the wreck was that of the Centaur, he said.

On Monday, Mearns and his crew sent the submarine robot into the depths again to take a second round of pictures, which included an image of the ship's bell and an escape hatch that one survivor climbed through just before the Centaur sank.

"We found the bell with the name on it. You can't get any better than that," Mearns said.

On Sunday, Queensland Acting Premier Paul Lucas called on Japan to apologize for the sinking.

"Whilst the Japanese have certainly apologized for their actions during the Second World War, it would be appropriate for those involved to express an apology," Lucas said. "In this barbaric act, people lost their lives. Sailors, soldiers, nurses, doctors, orderlies. It was totally senseless and a wanton act."

Monday was a national holiday in Japan, and phone calls to the Foreign Ministry in Tokyo went unanswered, as did calls to Japan's embassy in Canberra.

Queensland Premier Anna Blight said the Centaur will be marked as a military gravesite and protected.