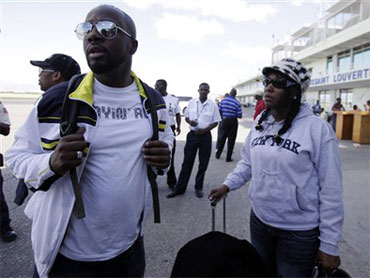 Haitian-born musician Wyclef Jean defended his charity on Monday in the wake of questions about its practices while calling on the international community to enable the evacuation of his homeland's earthquake-ravaged capital.

"Port-au-Prince is a morgue," Jean said at a Manhattan press conference, recounting how he collected the corpses of small children and adults from the festering streets on his recent trip. Tears streamed down his face as he looked into the camera, speaking to his countrymen.

Residents should be evacuated to tent cities outside Port-au-Prince to allow for aid to reach them and so cleanup can begin in earnest, Jean said, asking for help from around the world in building encampments.

"We need to migrate at least 2 million people," Jean said, promising to draw on his status as one of Haiti's favorite sons to aid in such an effort. "I give you my word, if I tell them to go, they will go. But they need somewhere to go to," Jean said.

The musician made the plea for an evacuation at the behest of Haitian Prime Minister Jean-Max Bellerive and President Rene Preval, said Hugh Locke, the president of The Wyclef Jean Foundation Inc.

The organization, also known as the Yele Haiti Foundation, has drawn fire in recent days as groups that vet charities raised doubts about its accounting practices and ability to function in a nation devastated by last week's earthquake.

CBS Station WFOR in Miami first reported on the questions about the organization.

Jean gave an impassioned defense of the organization, which has received more than $2 million in donations in just a few days.

An Associated Press review of tax returns and independent audits provided by Jean's foundation showed that it was closely intertwined with Jean's businesses.

Among the mistakes by the young organization, Locke said, was the decision to buy $250,000 of airtime from Telemax S.A., a for-profit TV station in Haiti that is majority-owned by Jean and another foundation board member.

Locke said that Yele believed it was getting a good price for airtime in a nation where many are illiterate and rely on the TV for information. The decision would be handled differently now, he said.

The foundation plans to send donated supplies to Haiti on a plane provided by FedEx on Saturday. It is still deciding how donated funds will be spent, considering such options as mobile schools for refugee camps and security forces to escort supplies, Locke said.