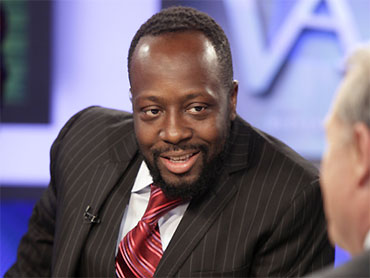 Wyclef Jean has stepped down as leader of the embattled aid group he founded as he prepares to formally declare his candidacy for the Haitian presidency.

The singer released a statement that he was resigning the chairmanship of Yele Haiti effective immediately Thursday.

The Brooklyn, N.Y.-raised entertainer was headed to his native Haiti and was expected to officially file his election papers Thursday afternoon at the provisional electoral council in the Haitian capital, Port-au-Prince.

"I am not stepping down in my commitment to Haiti. On the contrary, regardless of what path I take next, one thing is certain: My focus on helping Haiti turn a new corner will only grow stronger," Jean said in the statement.

Businessman Derek Q. Johnson will take up the helm of the organization.

Jean helped found Yele Haiti five years ago to raise money and build awareness of the myriad problems in his impoverished homeland. It raised $9 million in the wake of the Jan. 12 earthquake that killed a government-estimated 300,000 people. Of that, it has spent $1.5 million on food, water, tents, clothes and other products for quake survivors, Jean spokeswoman Cindy Tanenbaum said.

The organization - named for one of the former Fugee member's songs - often worked in partnership with the United Nations and other agencies to implement its programs, lending its name and Jean's cache to help raise funds.

But Yele came under criticism when post-quake scrutiny revealed alleged improprieties including that it had paid Jean to perform at fundraising events and bought advertising air time from a television station he co-owns.

Jean tearfully defended the organization in a news conference weeks after the quake. Yele also hired a new accounting firm after the allegations surfaced.

Jean was en route to Haiti and could not immediately be reached. From aboard a private plane he posted on Twitter: "Taking off on my way to Haiti me and my family About to make the biggest decision of our life (sic)."

It was accompanied by what appeared to be a camera photo of him in a shirt and tie, seated in a leather chair and reading a newspaper.

Numerous candidates are expected to seek the presidency in Haiti's Nov. 28 election, from those representing small factions, towns and pockets of the diaspora to former heads of government. They have until Saturday to register.

Among the most formidable contestants will be ousted ex-Prime Minister Jacques-Edouard Alexis, who secured the backing of President Rene Preval's powerful Unity party this week. Preval is barred from running by the constitution.

All candidates must be approved by an eight-member, presidentially approved electoral council that will verify constitutional requirements including having resided in Haiti for five consecutive years leading up to the election and never having held foreign citizenship.

The residency requirement could put Jean's candidacy in jeopardy from the start. The singer - whose age was until recently listed as 37 but whose brother said this week he is 40 - left Haiti as a child and lives primarily in the United States.

In an interview this week with The Associated Press, the brother said advisers believe he will be excused from the requirement because he has held a formal, at-large Haitian ambassadorship since 2007.