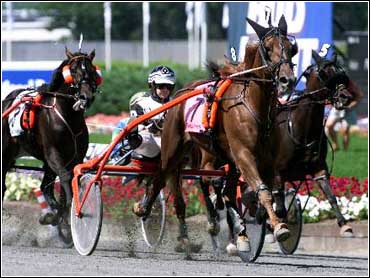 Yankee Paco took the lead in the stretch and scored a three-quarter length victory over fast-closing Credit Winner in the $1 million Hambletonian on Saturday at the Meadowlands Racetrack.

In getting to the winner's circle, Yankee Paco took the lead from Legendary Lover K and driver DeWayne Minor, who was looking to become the first black reinsman to win trotting's biggest race.

Minor raced on the lead from the middle of the backstretch until early in the stretch, but Legendary Lover K faded to sixth place in the 75th anniversary of the Hambletonian.

Once on the lead, Yankee Paco and driver Trevor Ritchie were never threatened as they trotted the mile in a career-best 1:53.2. The 3-year-old son of Balancedimage paid $6.60, $4.40 and $4 in winning his sixth straight start and earning $500,000 for Harry Ivey and his son, Dr. Tom Ivey.

Credit Winner, who was driven by Jim Meittinis, paid $14.40 and $9.60, while Armbro Trick and driver Ray Schnittker finished third and was worth $14.40 for show.

Favored Dreamaster, who came in undefeated in six starts this year, got shuffled back around the half-mile mark and didn't find racing room until the stretch. He finished fifth.

Uhadadream, the fastest of last weekend's elimination winners and the second choice, was up front early but faded to seventh.

Dreamaster and Uhadadream went to the lead as soon the race started and ran as a tandem for the first half-mile.

Minor, a 43-year-old driver who has worked at some of the smallest tracks in the country, broke Legendary Lover K from the No. 8 post, got him in good position early and moved him to the lead around the middle of the backstretch.

Ritchie and Yankee Paco, who started from the No. 7 post, followed Legendary Lover K to the front. When Minor put his $3,200 yearling purchase on the lead, Ritchie was forced to race without cover until the top of the stretch, a move that usually costs a horse dearly.

However, Yankee Paco raced gamely without cover, took the lead shortly into the stretch and won impressively, giving Ritchie a win in his first drive in the Hambletonian.

It marked the second time in three years that Yankeeland Farms, which was founded by former New York Yankees great Charlie Keller, has breed the winner. Two years ago, it was Muscles Yankee.

Fast Photo finished fourth and was followed by Dreamaster, Legendary Lover K, Uhadadream, Monte Hall and Pine Drop. Berndt Hanover went on a break before the start of the race and did not finish.

The $500,000 Hambletonian Oaks for 3-year-old trotting fillies produced a major upset when Marita's Victory, the last four to qualify for the race, got up in the final strides for a nose-length victory over Aviano.

Heavily favored Cologne Kosmos, who had won six of seven starts this year, set the pace for most of the race but faded to fifth.

"She started popping her left hind at the top of the stretch and I new something was wrong," said driver Bob Blanton, adding he did not think the injury was serious.

Marita's Victory, who raced as part of a Jan Johnson-trained entry with Naughty Hall, trotted the mile in 1:54 in winning for only the second time in eight starts this year and giving driver Berndt Lindstedt his fourth Oaks win.

Aviano, driven by Dave Miller, paid $6 and $7, while Day For Night and driver Mike Lachance finished third and were worth $4 to show.