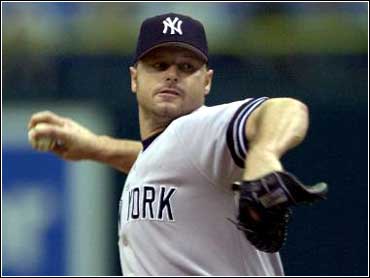 Roger Clemens and the New York Yankees agreed to a $30.9 million, three-year contract extension Friday, announcing a deal that had been rumored ever since he joined the team.

Clemens, 38, had been eligible for free agency after this season. Now, the five-time Cy Young winner can remain in pinstripes through 2003.

"It's great to know I have the opportunity to continue with a great club," Clemens said before the Yankees played at Anaheim. "My hopes were to have a chance to finish here, compete for another championship and shoot for 300 games in this uniform - the whole nine yards.

"And at this point, it looks like the final stop. I'll have a chance to pitch until I'm 40, which I never thought I'd have the opportunity to do."

Clemens is unbeaten is nine starts since June 9, going 5-0 with four no-decisions. He was the AL pitcher of the month for July.

Clemens is 9-6 and his 3.73 ERA is fourth-best in the league. His 128 strikeouts tie him for seventh in the AL with David Wells Clemens was traded from Toronto to the Yankees in a package for Wells before the 1999 season.

"I mean, obviously, he doesn't throw as hard as he did 10 years ago, but he is still a very high-quality pitcher. I'm pleased about the contract. It's going to make him feel good. And if he feels good, he's going to help our club."

Clemens has a $6.35 million salary this season, the option year of a contract he signed with Toronto before 1997. That was part of his previous deal that is paying him a total of $31.1 million over four years.

In addition, the Yankees have a $7.2 million option for 2004 with no buyout. There are no bonuses, and Clemens does not have any provisions that allow him to block a trade.

The two-time World Series champion Yankees have a record payroll of $112.5 million this season. They currently lead the AL East.

Clemens learned about his contract extension in a phone call from his mother. He told her to rest up for October and another trip to the Bronx.

In his first season with the Yankees, Clemens was the winning pitcher as New York finished off its second straight World Series sweep.

"Obviously, I want to win and I want to pitch well," he said. "I don't want to say that there aren't any more challenges. I'm not complacent, and I'll never be complacent in anything I do. If I do get complacent, then I'll know it's time to go ahead and shut it down."

Clemens is eighth in the career strikeout list with 3,444, just 65 behind Walter Johnson, and has won six ERA titles second only to Lefty Grove's nine. He also won an AL MVP award in 1986 and has struck out 20 batters tied for the major league record on two occasions.

"He takes such good care of himself. If you follow him around during the course of the day, you'll get tired just watching him," Torre said. "So if he doesn't break down, he's so competitive that I think you're going to get your money's worth."

The Yankees have already begun talking to recently acquired pitcher Denny Neagle about a contract extension. He's eligible for free agency after this season.

New York is also said to have an understanding - much like it did with Clemens - with second baseman Chuck Knoblauch. His contract runs through 2001, and the extension is thought to be worth $18 million for two years.