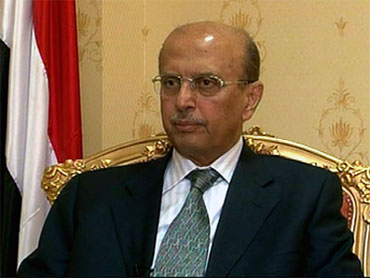 (CBS)
Yemen's Foreign Minister tells CBS News that while his country may not have given al Qaeda the attention it deserves in recent years, focusing instead on the separatist movement in the North, leaders have "refocused" attention on the terrorist organization and are now going after it with a vengeance.

Abu Bakr al-Qirbi said the government was exploring ways to convince al Qaeda militants "that we are serious," using intelligence and offensive operations against them.

Al-Qirbi confirmed for the first time that Yemeni authorities were attempting to watch the movements of radical cleric Imam al-Awlaki, a preacher linked to both the Fort Hood shooting suspect and Christmas Day bomb plotter Umar Farouk Abdulmutallab.

"I think he, with other al Qaeda operatives, are now under surveillance by security forces, for sure," he said of al-Awlaki.

"If he is caught, he'll be apprehended," added al-Qirbi, suggesting Yemeni officials were not aware of his exact location, or were unable to attempt an operation against him at present. Yemen's security forces are widely believed to control only the area surrounding the capital city of San'a — leaving thousands of square miles of mountainous terrain largely in the hands of tribes and militants, many of whom support al Qaeda materially, or at least philosophically.

Yemen's weak central government, which has huge financial and symbolic backing from the Obama administration, has deployed thousands of troops across the country and is continually conducting raids.

Al-Qirbi underscored Yemen's commitment to defeating Islamic radicals and working with the West in a way that can remove al Qaeda in the Arabian Peninsula (AQAP) from the country.

The Foreign Minister denied that recent counterterrorism operations were a direct response to Abdulmutallab's attempted bombing on Christmas Day. He said al Qaeda represents a very real and destabilizing threat to Yemen.

He said Yemeni officials had gleaned additional intelligence on Abdulmutallab and passed it on to their U.S. counterparts, but he would not discuss the nature or details of any new information obtained.

Al-Qirbi was quick to say that Yemen does need continued support from the U.S. and other Western nations. He said the money, knowledge, know-how and military technology provided were invaluable to the poor nation, but he stressed that American troops were not required in the country.

If Yemen were to accept foreign troops in the country, al-Qirbi said, it would undermine efforts to defeat al Qaeda, help the militants recruit, and incite anti-American and anti-West sentiment further.

He took issue with the American Embassy's decision to close for two days due to an apparent security threat.

"I think it plays into the hands of al Qaeda, because it's one of their objectives to scare and to prove that they can disrupt embassies," al Qirbi told CBS News. "Sometimes these decisions do not serve the purpose they are taken for."

Yemen's top diplomat is scheduled to be in Washington on Jan. 20 for a meeting with Secretary of State Hillary Rodham Clinton. He will underscore the need for help in developing Yemen's economy, increasing education and work opportunities and boosting social services that are severely lacking in the country.

Those methods, al-Qirbi will tell the Obama administration, are essential to defeating al Qaeda in the Arab Peninsula.