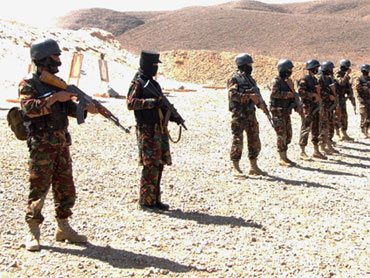 The reinforcements, aiming to beef up the military's presence in a remote region where the government has little control, were Yemen's latest move in a stepped-up campaign to combat al Qaeda. The United States plans to more than double its counterterrorism aid to the impoverished, fragmented Arab nation in the coming year to boost the fight.

Gen. David Petraeus, the U.S. general who oversees the wars in Iraq and Afghanistan and who announced the increased aid, arrived in Yemen on Saturday and met with President Ali Abdullah Saleh, a Yemeni government official said. The official spoke on condition of anonymity because he was not authorized to talk to the press.

The confrontation with al Qaeda's branch in Yemen gained new urgency after the failed attempt on Christmas Day to bomb a U.S. airliner headed to Detroit.

President Barack Obama said Saturday that al Qaeda's branch in Yemen was behind the attempt. A 23-year-old Nigerian accused in the attack, Umar Farouk Abdulmutallab, has told U.S. investigators he received training and instructions from al Qaeda operatives in Yemen.

U.S. and Yemeni investigators have been trying to track Abdulmutallab's steps in Yemen, which he visited from August until Dec. 7. He was there ostensibly to study Arabic in San'a, but he disappeared for much of that time.

Yemeni security officials said Abdulmutallab may have traveled to Marif or Jouf provinces - remote, mountainous regions east of the capital where al Qaeda's presence is the strongest - though the officials cautioned that it was still not certain where he met up with members of the terror group.

Yemeni Information Minister Hassan al-Louzi said Abdulmutallab's movements are "under investigation. They are trying to uncover where he went, who he met with."

The security officials also said Abdulmutallab may have been in contact by e-mail with a radical Yemeni-American cleric, Anwar al-Awlaqi, during his stay in Yemen. The officials spoke on condition of anonymity because they were not authorized to talk to the press.

Al-Awlaqi, who is in hiding in Yemen, is a popular preacher among al Qaeda sympathizers, calling for Muslims to fight in jihad, or holy war, against the West. Al-Awlaqi earlier exchanged dozens of e-mails with U.S. Maj. Nidal Malik Hasan, the accused gunman in the Nov. 5 mass shooting at the Fort Hood, Texas, Army post in which 13 people were killed.

On Friday, the Yemeni military sent hundreds of extra troops to Marib and Jouf provinces, the Yemeni security officials said.

Al Qaeda has killed a number of top security officials in the provinces in recent months, underscoring San'a's lack of control there. Tribes hold sway in the region, and many of them are discontented with the central government and have given refuge to al Qaeda fighters, both Yemenis and other Arabs coming from Saudi Arabia or war zones in Iraq and Afghanistan.

Yemen has carried out a series of airstrikes and raids against al Qaeda hide-outs in nearby provinces last month. The strikes, Yemen's heaviest in years, targeted what officials said were top leaders in the terror network's branch there. But the intensified campaign has not yet reached into the strongholds of Marib and Jouf.

The assaults come as the United States has beefed up counterterrorism aid to the impoverished nation on the southern tip of the Arabian Peninsula, providing $67 million in training and support last year. Only Pakistan got more, with some $112 million.

On Friday, Petraeus told reporters in Baghdad that U.S. counterterrorism aid to Yemen "will more than double this coming year."

Petraeus said Yemen was struggling to overcome many challenges - including a fall in oil revenues, a very young and rapidly growing population, and an insurgency making full use of the country's of rugged terrain - all of which made the country an attractive possible base for terrorism.

"Al Qaeda are always on the lookout for places where they might be able to put down roots," he said.

Yemen on Saturday welcomed a call by British Prime Minister Gordon Brown to hold an international conference on Jan. 28 to devise ways to counter radicalization in the country, the poorest in the Arab world. Brown said he hopes the meeting will coordinate donor efforts to help the government of Yemen and identify counterterrorism needs there.

Al-Louzi, the information minister, said Yemen will be "an active participant" in the conference. He said the gathering should address "all aspects" of the terror issue, including the widespread poverty and underdevelopment that Yemeni officials say fuels al Qaeda's spread in the country.

"Whoever wants to build Yemen's stability and build its democratic and modern values must help it, and not only in security but in development," he told The Associated Press. "The most important problems in Yemen are economic at their root."