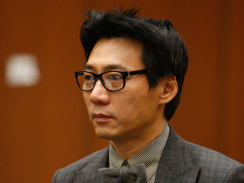 (CBS/AP) LOS ANGELES - Young Lee, the co-founder of the popular frozen yogurt chain Pinkberry, was ordered to stand trial on Thursday on charges he beat a homeless man with a tire iron in California.

Donald Bolding, 42, testified this week that he was begging from drivers on a freeway off-ramp last year in Hollywood when his shirt rode up and revealed a sexually explicit tattoo. He said a man identified as Lee got out of a car, demanded he apologize to his wife, then attacked him. Bolding was struck twice in the head and suffered a broken arm before witnesses stopped the attack.

On Thursday, judge denied a motion on to dismiss the assault with a deadly weapon case against Lee. Lee is currently free on bail. He is no longer is affiliated with Pinkberry.