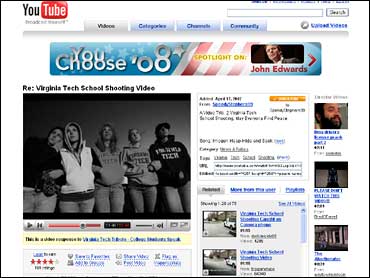 It was inevitable that the online video world would offer its take on a crime glimpsed as it unfolded most dramatically via a cell phone camera, carried out by a student who put together a CD-ROM of his manifesto and mailed it to a TV news network.

A quick search of YouTube brings up dozens of videos posted in the wake of the Virginia Tech massacre, many of them simply news footage lifted from the various networks.

But one of the most-watched videos — viewed by some 150,000 people — is a song dedicated to the families of the 32 victims. Playing keyboard, Kojo Best sings: "God bless your family, and your community, through this insanity."

Many of those who posted material simply talked into their Webcams to vent their feelings about the tragedy; others assembled photos in tribute to the victims.

Also posted, though, are dramatizations of two of killer Cho Seung-Hui's plays, which have become easily available on the Web.

The 10-page scripts — "Richard McBeef" and "Mr. Brownstone," which Cho wrote in a playwriting class last fall — are tales of revenge that include attacks with chainsaws.

At least four people posted videos in which they either read or acted out "Richard McBeef," mocking Cho and his writing. That play features an "aging balding overweight pedophiliac" stepdad named Dick who abuses his 13-year-old stepson.

The users, perhaps anticipating that some would view their videos as tasteless, included messages defending themselves.

A 32-year-old with the username SteveBrandon wrote alongside his two-part video: "This is posted not to make light in any way of the Virginia Tech massacre, I just thought I'd act out his bad writing to show what a freak Cho Seung-Hui is. Okay, I'm a fat freak too. But at least I'm not a killer."

Another "Richard McBeef" video begins with a title card that reads in part: "We posted this film to highlight and investigate issues connected with the tragic events at Virginia Tech." The text accompanying the video also linked to several charities.

But to those who knew the killer, the material is anything but funny.

"When we read Cho's plays, it was like something out of a nightmare," former classmate Ian MacFarlane, now an AOL employee, wrote in a blog posted on an AOL Web site.

Some of the comments posted in response to the YouTube videos were critical, including one that read: "Not funny. Sad that, as sick as he obviously was, people still find pleasure in making fun of him."

Responding to a lighthearted reading by two brothers posted under the username taagteam, another person wrote: "Had you known one single person killed or wounded or related to the victims in any way, you wouldn't be laughing."

YouTube said Thursday that the video-sharing site leaves it to the community to decide what is inappropriate.

"Clearly there are cases where certain users may post content which is not illegal, but which other users may find to be in poor taste, offensive, or distressing," the site said in a statement e-mailed to The Associated Press. "YouTube has clear content policies which prohibit illegal or inappropriate content to be uploaded."