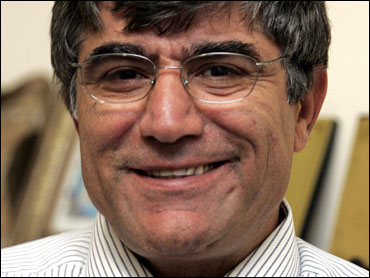 A homemade video clip set to a popular folk song that allegedly praises the suspected killer of an ethnic Armenian journalist has received hundreds of thousands of hits on the popular video-sharing Web site YouTube.

A radio DJ says the month-old song quickly rose to become one of the most requested songs on his show after word of the YouTube clip spread.

But a human rights group has asked prosecutors to take action against the folk singer and the songwriter for allegedly inciting ethnic hatred and violence. Prosecutors have launched an investigation into the video that shows Hrant Dink's dead body, followed by a heroic pose of his suspected teenage killer, who will stand trial next week.

Folk singer Ismail Turut - who describes himself as a Muslim and a nationalist - denies any links to the making of the YouTube video and says he does not approve of Dink's murder.

But the lyrics of the controversial song, written by Arif Ozan go: "If someone betrays his own country, he will be taken care of immediately."

Dink was slain outside his newspaper in January. He had been criticized for calling the mass killings of Armenians early in the century in the hands of Ottomans a "genocide" in defiance of the official Turkish line and was being prosecuted for insulting the Turkish identity.

Although thousands of Turks marched at his funeral to condemn the killing, some extreme nationalists view the teenage killer and his alleged accomplice as heroes for punishing the journalist who they feel betrayed the nation.

"He (Turut) must apologize," said Riza Dalkilic, head of Istanbul branch of the Human Rights Association who filed the complaint. The group is known for its advocacy of minorities and freedom of expression.

Turut said he had nothing to do with the YouTube clip and insisted his song is harmless. He was speaking a day after he and the writer of the song testified to a prosecutor to explain the meaning of their work.

"Even if I have 40 heads and they chop off all of them, I will not apologize for even a letter (of the song)," said Turut. "Who has been subject to the slightest of harm because of my song?"

The killings of Armenians constitutes a shadowy part of Turkish history that predates the modern republic.

Up to 1.5 million Armenians were killed from 1915 to 1917 in what Armenians and others say was a genocide. Turkey insists the numbers are inflated and that the killings occurred during a time of civil unrest during the collapse of the Ottoman Empire.

The slain journalist is not the only Turkish intellectual hated for expressing his opinion. Nobel literature laureate Orhan Pamuk is reviled by many Turks, mostly ultra-nationalists, for talking about the killings of ethnic Armenians and Kurds. He reportedly received many death threats.

The European Union, which Turkey is vying to be a member of, has asked Ankara to remove restrictions on freedom of expression such as the penal code article which bars insulting the Turkish identity. Despite grumbling by some Cabinet members regarding the article, a sweeping change seems unlikely in the short term.

Ironically, Turut and Arif also say their song should be tolerated if freedom of expression really exists.

"I feel like a victim in my homeland for defending some of our values" Turut said. "Don't I have the right to freedom of expression?"