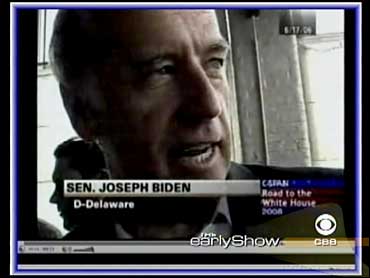 "YouTube" has emerged as a player in the November election.

Foot-in-mouth disease is no rarity among politicians but, reports CBS News senior White House correspondent Bill Plante, more of their embarrassing missteps are making their way onto popular video Web sites such as YouTube, and it's having an impact.

Plante points out this is a new take on an old dynamic.

President Franklin Roosevelt used radio, then a new technology, to form a personal relationship with Americans.

John Kennedy's debate with Richard Nixon made clear the awesome power of television, when radio listeners gave Nixon the edge, but Kennedy won over TV viewers.

Internet blogs and fundraising helped Howard Dean go from an unknown governor into a political powerhouse and then, once his now-infamous scream made the rounds, he was brought down with blinding speed.

YouTube is one of the Net's most popular draws, with more than 20 million visitors a month.

A posting there of a picture of Sen. Joe Lieberman of Connecticut kissing President Bush helped fuel Lieberman's loss to anti-war candidate Ned Lamont in the recent primary in the Nutmeg State.

And Sen. George Allen, R-Va., who's running for reelection, has seen his once large lead in the polls slip to just a few points. A big reason: a video on YouTube of his using the term "macaca" to refer to a campaign opponent. "Macaca" is seen by many as a racial slur.

"With the Internet and YouTube, there is no discussion. It's automatically posted," notes long-time Bush strategist Matthew Dowd.

He says he worries about a loss of spontaneity in politics: "When a time that the public wants authenticity, I think the Internet and YouTube is causing people and politicians to actually be less authentic, because they worry about what's going to get caught on the Internet."

Because, Plante observes, politicians do get caught being, well, let's say less than perfect.

Such as when Sen. Joseph Biden, D-Del., was taped saying, "You cannot go to a 7-Eleven or Dunkin' Donuts unless you have a slight Indian accent. I'm not joking!"

Biden said that with a smile on his face.

But some political pros welcome the newest tool in techno-politics.

"You can influence it, but you can't control it anymore, so you have to let go a little bit," says Democratic strategist Joe Trippi, who ran the Internet-fueled Dean presidential campaign in 2004.

And he says he sees YouTube as a tool for weeding out overly-manufactured candidates: "I think, if you think you have to be perfect all the time, you're finished now. The best way to think about it is, 'No, I have to be who I am all the time, and I have to hope and believe that the American people will like who I am."

But, concludes Plante, just being themselves will suit some politicians better than others.