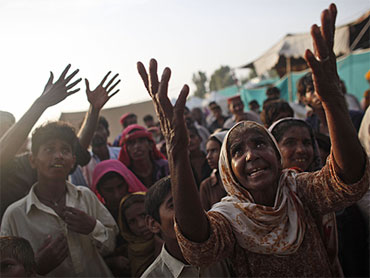 Islamist terrorists may exploit the chaos and misery caused by the floods in Pakistan to gain new recruits, the country's president warned Thursday — remarks echoed by a leading U.S. senator who said America would stand by its vital wartime ally during the crisis.

The floods have affected 20 million people and about one-fifth of Pakistan's territory, straining its civilian government as it also struggles against al Qaeda and Taliban violence. Aid groups and the United Nations have complained that foreign donors have not been quick or generous enough given the scale of the disaster.

"All these catastrophes give strength to forces who do not want a state structure," Zardari said during a press conference with John Kerry, chairman of the Senate Foreign Relations Committee, after the two visited some of the country's hardest-hit areas and a relief camp.

"There is a possibility that the negative forces would exploit the situation," Zardari said. "Like they would take the babies who have been made orphans and take them to their camps and train them as the terrorists of tomorrow."

Zardari's government has been criticized for failing to respond quickly enough, and Islamist charities — at least one of which has alleged links to terrorism — have been active in the flood-hit areas.

There also are concerns the scale of the suffering could stoke unrest and political instability that may distract nuclear-armed Pakistan from the fight against the Taliban. Already, the military has had to divert thousands of soldiers and a good deal of equipment from battling the militancy to rescuing flood victims.

"None of us want to see this crisis to provide an opportunity or an excuse for people who want to exploit the misery of others for political or ideological purpose, and so it is important for all of us to work overtime," Kerry said.

More than three weeks after the floods first began, the U.S., Germany and Saudi Arabia all announced new pledges of aid, while Japan said it would send helicopters to help distribute food, water and medicine. The Asian Development Bank said it would redirect $2 billion of existing and planned loans for reconstruction.

"If we don't do it quick, if we don't do it well, what will the Pakistani people think?" asked Juan Miranda, the development bank's director general for Central and West Asia. "We have to put every road and every bridge back into the shape where they should be."

The United States has dispatched 19 army helicopters to hard-hit areas and given other aid worth $90 million. Kerry said the monetary assistance would increase to $150 million, a figure expected to be formally announced at a U.N. General Assembly meeting in New York on Thursday.

The U.S.'s primary concern is humanitarian, Kerry said, while adding, "Obviously there is a national security interest."

Many need help now, but unlike in previous disasters, relief for Pakistan has been much slower to come, reports CBS News Correspondent Richard Roth.

"Although governments have been coming forward with increasing generosity, the public response has not been the immediate outpouring of generosity that we've seen for Haiti and the tsunami five years ago," the U.N. Under Secretary John Holmes said.

Richard Holbrooke, the U.S. special representative for Pakistan and Afghanistan, told the Asia Society in New York that the United States was the first and largest contributor, and he challenged other countries, especially Pakistan's close ally China, to "step up to the plate."

Holbrooke said says "many billions" of dollars would be needed to help Pakistan rebuild. He spoke ahead of the U.N. General Assembly meeting to spotlight the immediate need for $460 million for food, shelter and clean water.

Saudi Arabia said it would donate $80 million to Pakistan, the official Saudi Press Agency reported, making it one of the largest donors. The country has for years sought to project its influence in Pakistan and has funded the spread of hard-line Islamic theology here that many say gives traction to armed extremist movements.

Pakistan is vital for America's strategic goals of defeating militancy and stabilizing neighboring Afghanistan so its troops can one day withdraw. Before the floods, Washington had already committed to spending $7.5 billion over the next five years on humanitarian projects in Pakistan.

That money already included plans to deal with infrastructure, water and power problems in Pakistan, and Kerry said at least $200 million would now be refocused toward tackling challenges in those and other areas directly posed by flooding.

The senator witnessed much of the devastation during a helicopter tour in Punjab province. The muddy brown water stretched for miles, with only treetops and upper levels of houses showing in some areas. A train stood idle on a track just out of the water's reach.

At a relief camp in Jampur, hundreds of flood victims mobbed Zardari and Kerry, pleading for help. Women and children said they needed water and food, and moaned about lost homes.

The floods began in the northwest of the country after exceptionally heavy monsoon rains and have since swamped thousands of towns and villages in Punjab and Sindh provinces. While rainfall has lessened, flooding is continuing in parts of Sindh province as water from the north courses down the Indus and other rivers.

Local aid groups, the Pakistani army and international aid agencies have helped hundreds of thousands of people with food, shelter, water and medical care, but the distribution has been chaotic and has not come close to reaching everyone.

Mohenjo Daro's structures, dating back to the third millennium B.C., are mostly made of unbaked brick and are vulnerable to flood damage.