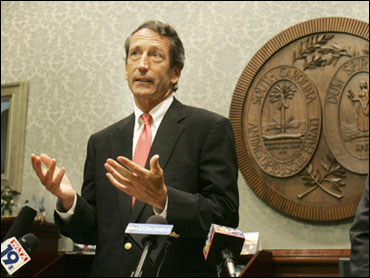 (AP Photo/Mary Ann Chastain)
Republican South Carolina Governor Mark Sanford said in a pair of interviews this week that he will not succumb to intensifying pressure to resign as a result of an extramarital affair with an Argentine woman revealed earlier this year.

Sanford, who described his current state of mind as "Zen-like," told the Wall Street Journal that his critics now "smell blood in the water." But he rejected the notion that he should "crawl into a cave" and step down, an action advocated by 50 percent of his constituents, according to a recent InsiderAdvantage poll.

Republicans in the South Carolina House say they have the votes necessary to impeach Sanford when they reconvene in January, and the Journal reports that many of his strongest allies have called for his resignation over the past week. Lt. Gov. Andre Bauer is among those who have called for Sanford to step down.

Sanford also spoke to the Washington Times, where he insisted that God wants him to fight on. He told the paper his experience has been like that of former Republican vice presidential candidate Sarah Palin, who has faced what he considers baseless criticisms.

"I think I now know what Sarah may have been feeling," Sanford said.

Earlier this year Sanford was seen as a man with a bright political future, someone believed to have the potential to be his party's presidential nominee in 2012. His attempt to refuse a portion of the stimulus funding designated for his state, and his passionate opposition to the stimulus package more generally, raised his national profile and made him a darling of fiscal conservatives.

But the revelation of his affair dramatically lowered his stock, as did recent news that investigators were looking into whether Sanford improperly used public funds and aircraft.

Sanford says the investigation was initiated by political enemies exploiting the current environment for "payback" against him and insists that he did nothing wrong.

"We have really changed the way things have been done in this state for a long time, and that produced bruised feelings," he told the Times.

Sanford is also now trying to reconcile with his estranged wife, Jenny, who moved out of the governor's mansion last month with the couple's four boys. He has been on a tour of the state asking for forgiveness and explaining his goals going forward to constituents.