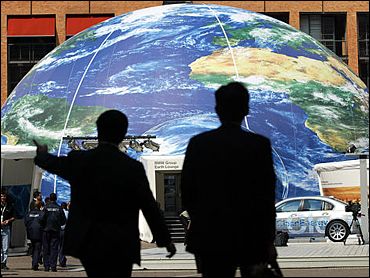 Delegates at the World Summit on Sustainable Development on Tuesday urged increased global efforts to bring new agricultural technologies to the developing world and railed against wealthy countries' agricultural subsidies for their farmers.

The 10-day summit, which began Monday, is focused on uplifting the world's poor and protecting the global environment.

"There is no point of having healthy children if they are going to die of malnutrition," said Pedro Sanchez, former director of the International Center for Research in Agroforestry. "There is no point in being an environmentalist with an empty stomach."

Meanwhile, negotiators continued trying to reach a compromise on the conference's implementation plan, which many delegates hope will include detailed timetables for tackling problems of energy, biodiversity, food security, clean water and health care.

Developing nations are trying to extract more aid, along with greater access to Western markets and technology from the summit. The United States is resisting any new aid targets or timetables, while demanding that aid recipients reduce corruption.

During Tuesday's session, many delegates criticized European and American agricultural subsidies, saying they made it difficult for poor farmers to compete on the world market.

Developing countries are hoping the summit's action plan will call for the reduction and elimination of "environmentally harmful and trade-distorting subsidies."

"Unsustainable agriculture would not be possible without these subsidies," Vandana Shiva, a women's leader and organic farmer from India, told the summit.

Wealthy countries are opposing the proposed language, and the summit was unlikely to resolve the issue.

"No country can realistically be expected to make a major commitment here on those matters," South African Trade Minister Alec Erwin said.

Sanchez recommended that wealthy countries commit 5 percent of the money they spend on subsidies to fighting hunger in the developing world.

An estimated 800 million people go hungry every year and about two-thirds of the world's farmland is affected by land degradation.

Delegates said new technologies in fertilizers and other agricultural sectors could help reverse that trend, but those advances need to be shared with the developing world.

"We can roll back hunger immediately," said M.S. Swaminathan, an expert on sustainable agriculture.

About 150,000 poor farmers in Africa were using new, sustainable technologies in fertilizer and soil replenishment and, as a result, were far more productive than their neighbors, Sanchez said.

"It can be done gentlemen. The question is do we have the political will to do it," he said.

The summit, which is being held in a convention center attached to a shopping mall and business complex, was sealed off by concrete barriers and metal fences. An 8,000-person security force is deployed to help prevent the kind of violence seen in past years' international meetings in Seattle and Genoa, Italy.

Activists accused big business Tuesday of hijacking the Earth Summit from its goal of curbing poverty without damaging the planet.

"The resources of Mother Earth are being sold off," said Anuradha Mittal of Indian group Food First on the second day of the 10-day talks in Johannesburg tackling issues from promoting clean energy and preserving fish stocks to fighting AIDS.

"The agenda has been taken over by the United States and the European Union in trade liberalization," she said, as activists complained about limited access to the main summit venue.

Many other campaigners echoed charges that businesses would get better deals than those on environmental protection at the summit, a charge rejected by the main business lobby.

"Business is happy to work with others to deliver and make sure we address the environment issues and we look at the social side," said Mark Moody-Stuart, former chief executive of Shell and head of Business Action for Sustainable Development.

BASD represents about 200 corporations in Johannesburg, including automakers, chemicals groups and oil majors.