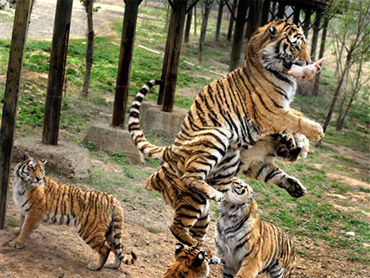 Eleven rare Siberian tigers, starving and kept in small cages, have died at a cash-strapped zoo in China, heightening concerns about conditions at wildlife facilities in the country, where activists say profiteering off the carcasses of endangered species sometimes drives over-breeding.

The deaths of the tigers occurred in the past three months at the zoo in the cold northeast, officials and state media said Friday. Reports said the tigers starved to death, having been fed nothing but chicken bones, although a zoo manager said unspecified diseases killed the animals during the harsh winter.

Siberian tigers are one of the world's rarest species, with an estimated 300 left in the wild, 50 in China. But about 5,000 are held captive on farms and wildlife parks across China.

The Shenyang Forest Wild Animal Zoo where the 11 tigers died has been struggling financially and to keep its big cats alive, even withholding pay from staff, said a woman in charge of corporate planning for the zoo who would only give her surname, Wang.

"You can do the math: One tiger eats 10 kilograms (22 pounds) of beef per day and there are at least 30 of them now," Wang said. "There are lions, elephants and other animals too."

The food bill for the tigers ran to about $1,320 (9,000 yuan) a day - nearly half the feed allowance the zoo gets from the local government to care for all the animals, Wang said.

"The zoo has been taking money from the staffers' salaries to feed the animals," Wang said. "Everybody wants the zoo to recover."

The deaths underscore the conflicting signals in China's attempts to save its dwindling number of tigers. While extensive conservation efforts are under way, animal protection groups say zoos and wildlife parts may be deliberately breeding more animals than they can afford, hoping to sell off the carcasses onto a black market where tiger parts fetch a high price for use in traditional medicines and liquor.

"We've seen cases where tiger farms have steeped the bones from their deceased tigers in liquor to sell to visitors," said Hua Ning, project director for the China branch of the International Fund for Animal Welfare.

The Shenyang Forest Wild Animal Zoo is a long-troubled tourist spot, also known as the Glacier Animal Zoo. In November, 2007, three tigers killed a fourth during a fight over food. At the end of last year, two hungry tigers there were shot and killed by police after they mauled a zookeeper.

In the latest deaths, the state-run China Daily newspaper quoted Liu Xiaoqiang of the Shenyang Wild Animal Protection Station as saying that the tigers had been kept in cold, cramped metal cages and were fed nothing but chicken bones.

Zoo spokesman Wu Xi however insisted the animals died from "various diseases" that were hard for them to endure because of this year's unusually harsh winter. He said the tigers were kept in cages indoors because of the bitter cold.

Wu wouldn't specify what diseases the animals had. He said 30 tigers now remain at the zoo but some remain at risk of illness.

"Some of the physically strong ones might survive the current difficulty, including the cold weather and the diseases," Wu said.

Wang, the zoo executive, said the bodies of the 11 tigers have been put into a storage freezer and denied there were any plans to sell them. "China has regulations on tiger skins and bones, which are barred from going into the market," she said.

The China Daily said the zoo was mainly privately owned, though the Shenyang municipal government holds a 15 per cent stake. Wang said the zoo had been up for auction for some time without any bidders.

China banned the sale of tiger parts and the use of tiger parts in Chinese medicine in 1993, imposing stiff sentences on offenders, but tiger bone, penis, pelts and other parts are still sold illegally to consumers - some who believe the products increase potency or can cure ailments from convulsions to skin disease.

Hua, of the International Fund for Animal Welfare, said she didn't have any specific information about the Shenyang zoo. Her organization is more concerned about tiger farms.

"We have some tiger farms that are raising the animals in the hope that eventually China will relax its restrictions on the sale of tiger parts and derivatives," Hua said.

Hua said China needs to strengthen its supervision of zoos and create basic standards for care and step in when zoos can't take care of their animals.

"Because there is no legal standard, facilities like these apply their own," she said. "Some take good care of the animals but there are also a lot of abuse cases."